Most parents love their children which is not a bad thing. It is the fate of children the world over to live up to their parents idea of them as 'little angels' (or cultural equivalent) which may not be so benign. Many parents express these Angelic qualities to others by dressing their kids in suitable 'little angel' attire. But who really knows what angels wear?  (Apart from Michaelangelo of course, and he had his own agenda and should not be taken literally.)
Regardless, I would take a big slice of the action that it is not this:
or this
Also spotted were cute departments selling angelic footwear 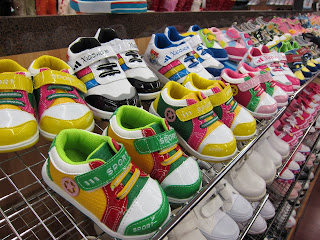 I did not see any very small boy Angels wearing Mini-Elvis-Angel outfits, but I did see these girls and many more like them. 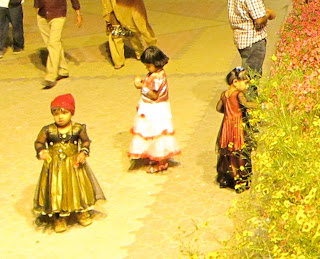 This does not seem so much an expression of parental love but more of a cute show, where the poor little sods have to out-cute each other in public.

This has probably been happening all over the planet since the first cave-baby was displayed to other envious cave-parents in a bear skin tutu. But, unlike todays kids, they were not being targetted by multinational marketing departments determined to sell fashion-crap and all the nonsense that goes with it.


It would be nice to think that the kids themselves don't know (or care) and are not adversely affected by all this, but one has to wonder where the 'little princess' and its adult counterpart 'the fashion victim shopoholic' start.

Then again I don't have kids so what do I know...
(The lack of a question mark indicates that this is a rhetorical question, but do not let that stop you from suggesting answers)
Posted by RPJ at 11:10 PM