There was not much need for eating out. We had breakfast in the hotel and lunch on site and after a dirty pint -  the one just back from the site, and before a shower - I'd munch my way abesent mindedly through copious bowls of pop corn and olives which were served with every drink and must have put on a couple of kilos in the last few weeks [and the rest. Ed.]. The killer combination of beer and a weak will. Still, plenty of time to diet when you're dead.

Herb and Simon came over one night and we went to the Japanese restaurant on the eighth floor of my hotel.


Then Herb came over again and we went to the Golden Oryx. 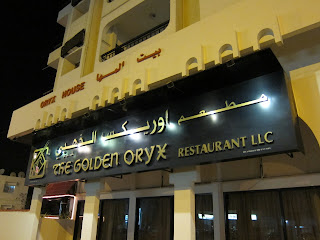 Everyone else thought it was brilliant, and that included Cindy Cheung (the Chinese Team Leader) and she should know what with being Chinese an' all. But then again she is Hong Kong Chinese and that is different (so I am told). 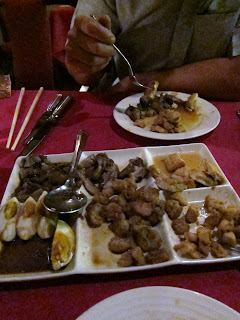 Personally I thought was the worst Chinese meal I could remember and I remember London Chinese take aways of the 1970s. Maybe we just visited at a bad time on a bad day. And it cost silly money. Personally I would have preferred less choice, plainer surroundings and better food costing less than my flight.
Apart from the Arabic, this place would not have looked out of place in Brighton: 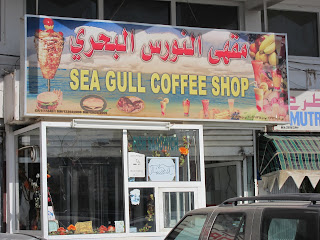 And I just had to have lunch here one day. It is the Omani equivalent of a greasy spoon (a working person's cafe for the uninitiated).

I was probably the only westerner they had served since arriving on the planet. The guy asked if I was from England and I said yes, then asked if he was from outer space - ho ho ho! how we laughed...
The menu was sparse, just an indeterminate meat curry, a similarly anonymous vegetable curry and some fish which looked as though they had been to the fish equivalent of the university of hard knocks - if they could speak they would probably say 'Hey! Hoo yoo lookin' at...?' - so I had some. 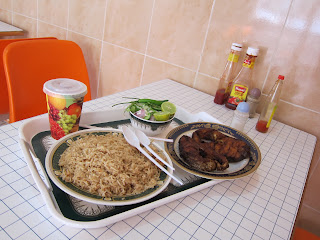 I am unlikely to hired as a food critic on account of my insensitive palette and lousy memory for menus and tastes. I can just about differentiate  between major food groups but I do remember that the rice was flavoursome (cardamom maybe? a little chilli and something a little bit sweet) and the fish was just plain delicious (flaky white fish with a crumbly, mildly spicy coating). The green salad with limes and chillis was an excellent foil and pomegranite juice was not too sweet which suited perfectly. Bloody marvellous, one of the best meals I had, I could hardly walk back to the hotel. And only 2.2 Rials (about £3.50)
The other best eating out experience was at the local kebab stall, the only eatery I visited twice. (Later I discover they are called schwamas)

The stall is not much to look at in daylight... 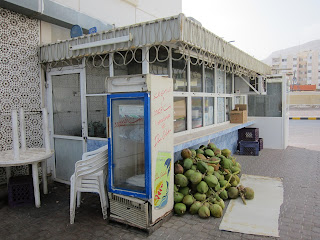 ...and still pretty grim in the dark. 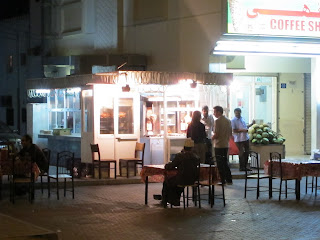 But the people were nice. 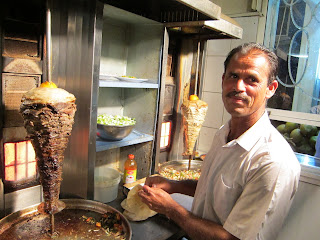 and the food was... well, see blog Snippets of wisdom - A night on the Tiles for more details.


Delicious meals are one thing but... 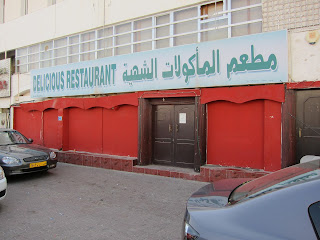 a delicous restaurant didn't really appeal to me , or anyone else it seems as  I never saw it open.
Maybe it's not a restaurant at all...
Posted by RPJ at 10:43 AM