The Times of Oman newspaper, BBC World 24 Hour TV New Channel and most other news media are leading with stories of Christmas travel misery complete with the usual pictures of unhappy punters sleeping on the floor at airports all over northern Europe.
I am at Muscat airport assuming that my flight to Paris Charles De Gaulle will depart on time, but there is no guarantee if, or when, we will arrive. Meanwhile, it is not exactly plain sailing here either. We have our problems too. I am drowning in a sea of blue Chesterfields, it's like a nightmare where you go to World of Leather to buy a sofa and they only have one style - hell! 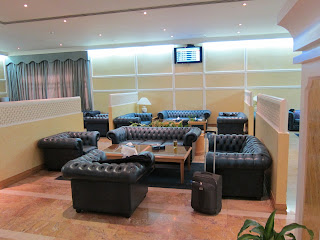 The food appears to be in the process of being abducted by the flying saucer from the Simpsons: 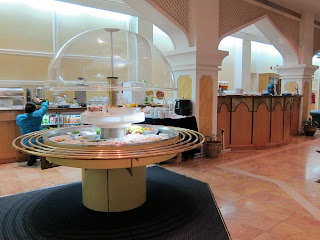 The selection is all funny foriegn stuff, and not a pork scratching in sight. 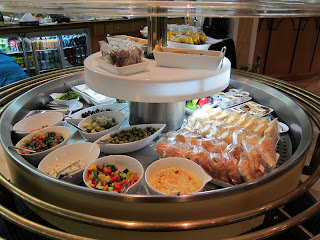 No Hovis or chips either: 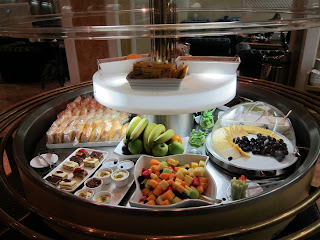 Just fresh fruit and hippy food.
There is nothing to drink but water, orange juice, mango juice and pomegranate juice (not fresh, it’s the re-constituted syrup); a paltry selection of beers (Heineken and Fosters, not a drop of bitter to be had); a couple of fortified wines, and stuff that smells like a liquid herb garden, only red or white wines of dubious appellation and no decent rosé; and as for the selection of spirits and mixers, well! it would be inadequate for even a modest New York five star hotel cocktail lounge: 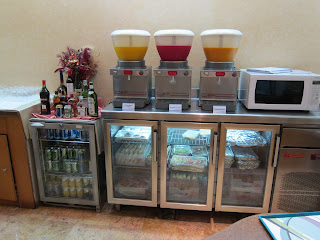 The soft drinks and mixers are way too cold, they should be a refreshing four degrees but I swear these specimens are nearer a chilling one degree. 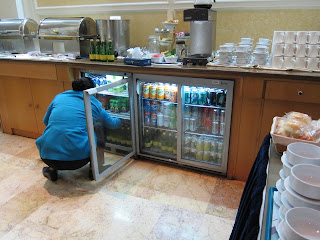 The WFi is so slow that I doubt I will have finished downloading the Steven Spielberg (Directors Cut) Collection 1974 – 2010 by the time we leave. This is a real shame and Mrs PJ and I were hoping to catch up a few classis movies over Christmas.
And the Oman Air have the cheek to charge seven Oman Rialls. But I suffer in silence and keep a stiff upper lip, and hope for a delay, a couple of hours would suit nicely.
Posted by RPJ at 8:52 AM