I have just had a dream experience. Well sort of. If you spend a lot of time in hotels it is easy to get a little critical of things that do not work very well. It does not matter where you stay, there are always things you would prefer to be different.
Some of these are personal preferences (see the post entitled Hotel - Personal Preferences which I hope to write some day soon) and some are down to crap design. My room at the Al Falaj is pretty much OK, it has a flat screen TV screwed to the wall which frees up valuable surface area for me to clutter up with stuff I thought would be indispensible but has remained untouched since I arrived. 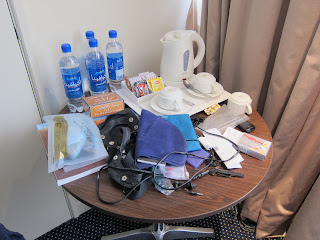 It has a mini-bar which, disappointingly, is not a small but friendly venue with stools, and a bar tender with beer on draught but a rather mundane fridge. 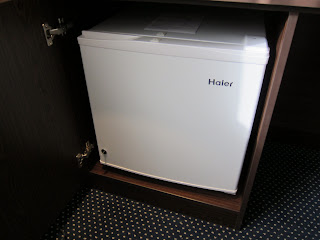 It is stocked with the usual assortment of beer, miniatures and mixers. 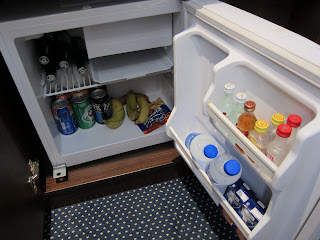 There are also the ubiquitous potato based snacks, in this case ‘Crispy Ripples’ which sound like some form of rhyming slang but are in fact wavy crisps (Hot Chilli Sauce flavour - mmm). 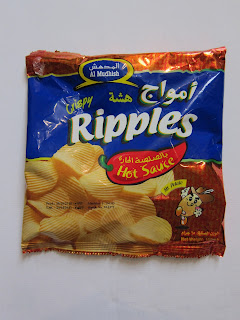 Being in a Muslim country the fridge has a lock (see pic above) which I guess is to reduce the temptation for less committed Muslims who may stay in the room. It also has a security seal facility, presumably to act as a signal of the fridge being opened in case the room is subjected to some sort of monitoring. 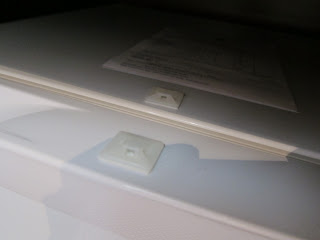 Maybe they suspect that it may be used by a Muslim locksmith with a bad attitude to his faith but good lock picking skills.
The prices are the usual bargain found in these circumstances and are in the same sort of bracket as strip club champagne. In fact there are few things which are worse value, hotel phone calls and printer supplies being prime examples. 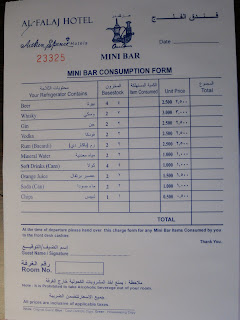 But there is always room for improvement.

There is WiFi in the hotel but it seldom penetrates this far. However they have provided and ethernet cable system. Unfortunately the RJ45 socket is on one side of the room and the desk is on the other side, a distance of 3 metres. The RJ45 cable is approx 2.5m. 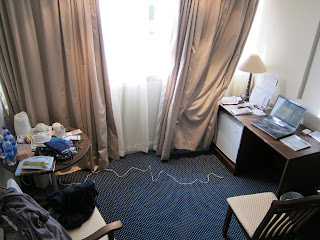 I though about moving the desk closer to the socket but it has a mini-bar in it and while it is not full of deliriously happy punters and a bar tender, it was just heavy enough for the ‘can’t be arsed’ factor to kick in. Fortunately I could be arsed to request a longer cable which was duly provided. Result! In fact it is long enough to reach next door, and possibly further. 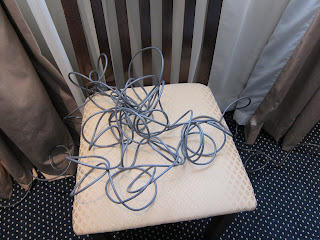 As you come into the room there is a neat little key holder so you always know where your keys are and don’t forget to take them with you. It doubles as a switch for all the power in the room and is an attempt to cut down on waste / save the planet / be 'green' / cut costs / increase profits (you choose). 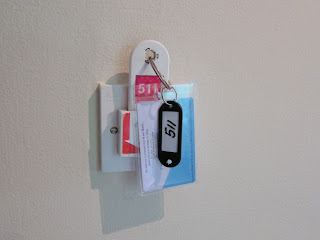 The effect is that whenever you leave the room the TV, lights and air conditioning go off. This is very annoying when you are just popping to breakfast or going to borrow a cup of sugar from a neighbour. So I have taken my key off the tag and leave the tag in the cut-off device. The downside being that I never know my key is and am continually forgetting to take it with me.
This is known as the law of unintended consequences.
On the topic of electricity, the light switches are what in the computer industry is referred to as ‘non intuitive’. 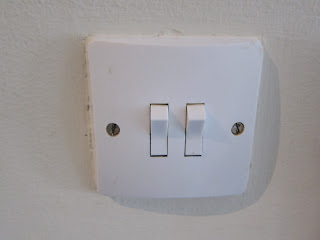 That is to say that the one on the right controls the light on the left (the bathroom) and the one on the left controls the lights on the right (the room). I thought I may be being overly fussy [surely not. Ed.] but I notice that even the housekeeping staff get it wrong when they come to make up the room.
However at least they do the decent British thing and are down for on and up for off. The picture above does not serve any real purpose, but it does demonstrate the fine macro facility on the Canon PS S95 which is automatic unlike my previous Ixus which had to be selected manually - but I digress…
There is a safe. 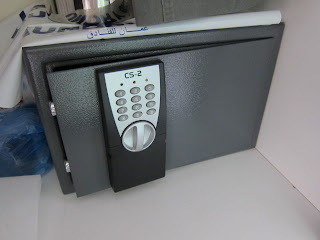 It has instructions that seem easy enough, but require such fine adjustment of the handle to set the code that I have as yet failed to use the damn thing.
Fortunately the Omanis are a law abiding lot and I do not have great fears for the security of my personal belongings. Having said that some bugger has nicked my WFC hat. It's a nice hat but not so nice that I would have kept it in the safe...
For a hotel that charges around a squillion quid a night the shower curtain rail represents an unnecessary saving and regularly collapses on me and housekeeping staff alike. 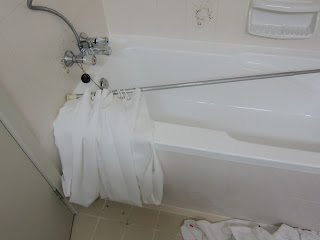 I have now run several master classes in shower rail replacement, and am working on a Power Point Presentaion to raise the percieved value and thus be in a position to charge for them when other work is thin on the ground.
There is a large wardrobe with some drawers. They are the sort of drawers which will fall out if pulled too far, but due to a cunning design feature they are prevented from doing this by fouling on the door. This could have been a clever bit of design, but unfortunately (a common word in this blog) it means the draws only open about six inches. It is like keeping your clothes in a (very shallow) pillar box [mail box U.S.] 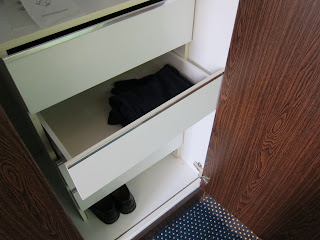 So, with this catalogue of trivial inconveniences occupying that part of my brain reserved for such things, imagine my delight when I was informed that my room is the best room in the hotel and would I mind if the designer came up to see how her plans are working out.
And imagine their joy when I dumped all the foregoing intelligence on them when they arrived. I think they decided to reschedule their meeting for after I had left.
I did not think to take a picture of them but here is the manager and maintenance man coming in about ten minutes later to see about the shower curtain. 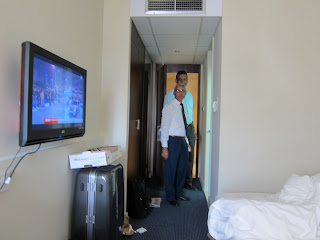 True to form, and as mentioned above, this is the one design feature that I can fix myself, but I suppose it shows willing.
My room is Room 511 if you are heading this way and want the very best. If you just want to put drinks on my tab then it is room 524.
Posted by RPJ at 6:36 AM