I had my new drive delivered yesterday. 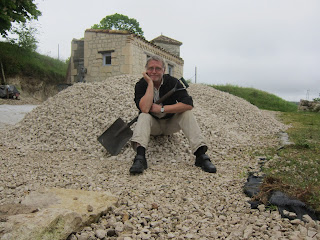 I do not feel inclined to let today's events in London pass without comment - sorry:

The reverence accorded to Margaret Thatcher needs be seen in context. I did very well out of Thatcherism, but then I am a (reasonably) well educated, middle-class white man from the south east of England, so the chances are that I would. I also won with the National Health Service,  free further education, easy employment when I wanted to work and a very generous social security system for when I didn't. Oh yes, and the minute I bought a house, property values soared, securing me a valuable asset for later. My generation got all the goodies and then pulled the drawbridge up behind us. Thatcher would be proud of that, hell, she was proud of that.

She was my MP in the 1960s when I lived in Finchley, I disliked her then, grew to distrust her and finally to detest her and everything she and her bully-boy government stood for. But time has mellowed me [Not much - Ed.] and it is time for a more objective take on it all, in a subjective way of course.

Leaving aside the lack of precedent for what is in effect a state funeral for someone who was not a head of state,  does not have the suport of the whole (or even half) of the population, and was not a 'national treasure', her ceremonial funeral is costing in the region of £10m. The chances are that the majority of the bill will be paid by the tax payer - and I doubt the £10m includes 'lost production' while the great British public, lucky enough to have a job, watch the display at their workplaces, or just take the day off. All this in the same week as the disabled and unemployed have their benefits cut to save the public purse £100m, the equivalent of a handful of City bonuses.

This was the Prime Minister who did not know the meaning of the word compromise,  who brought the 'big bang' to the City of London and paved the way for what turned out to be unregulated financial services that destroyed the savings and pensions of millions of Britons, sowed the seeds of the greatest, and most destructive social divide between the 'haves' and the 'have-nots' since Victorian times, and celebrated greed and personal gain over communal wellbeing. She also befriended General Pinochet in Chile (if you don't know, Google him), thought of Nelson Mandela as a terrorist and, and, and...

Many who revere her appear to have done very well out of Thatcher and her spiteful regime. They seem to see the cost of things rather than their value. They have bought into the gung-ho simplicity of Thatcherism 'making Britain great' again. Maybe one of them can tell me how that greatness manifests itself? Preferably without recourse to saying how extreme the unions were in the 1970s. At the same time, maybe they can explain how extremes in either direction are anything but divisive.

Time of course will tell exactly how much damage her crass worship of market forces will wreak on our society, but while we wait here is a summary of the various achievements of two British Prime Ministers as recorded on the official Downing Street web site:

Gave security of tenure, and the right to buy homes, to tenants of local authorities and other bodies.

Introduced social security, in which persons of working age had to pay a weekly contribution and in return were entitled to a wide range of benefits when they could no longer work

Allowed the creation of National Parks and Areas of Outstanding Natural Beauty in England and Wales, gave the public rights of way and access to open land

Brico Depot is a cross between B&Q and a budget builders’ merchant. Brico is short for bricolage and means ‘Do It Yourself’.

Brico Depot is fronted by a nameless character who gurns from every poster site, flyer and most aisles in the shop. It is easy to imagine that he is Mr Bricolage, but that is the name or another DIY retailer.

He may have a name known to the cognoscenti (Brico Jim or Ronald Mc Brico?) but to us humble punters he remains nameless.


Brico Depot has a load of cheap basics, they also have some pretty expensive stuff which would still be costly at half the price and a delightful feature called Arrivages which are limited stocks of bargains.

Being France it is illegal to have sales out of the sale season. But it seems that there are special arrangements for one-off bargain offers. We get flyers the size of newspapers from Brico Depot promoting their Arrivages quite regularly. The flyers will tell you how many of each item is available at your local store. 87 drills, 41 generators, 237,000 nails etc. I have taken advantage of the incroyable prices on a number of occasions.

The Montauban branch comprises three departments gathered around a small car park which is always full. One department sells windows, doors and stainless steel chimney components, next door is the builders merchant yard and on the other side of the car park is the main store which feels like a warehouse and sells everything else.

The builders merchant yard used to have a reception hut displaying a sample of everything they sell with a big number next to it. You would have to fill in a form with the item number, colour size and quantity as appropriate. They would enter it on the till and take the payment. Then you would be allowed to enter the hallowed yard and select the items you had paid for. Of course sometimes the item you wanted was not in stock, so you would have to go back to the cashier and get a refund. It was slow, labourious and a real waste of time.

Recently they decided to run it more like a supermarket. You drive in, overload your car with breeze blocks…

Anyone who has been to a festival in UK recently may have seen Cube Henge (or one of its derivatives). It is a dance space decorated with 1000 litre liquid storage tanks all lit up with flashing coloured lights.

Brico Depot has its own version. They only come in white, use natural sunlight and the music is crap, (but you get used to that in these parts).

Brico Depot not only sells wheel barrows, you can also buy the bits separately, so if you bend the frame you can buy a new one and transfer the bucket and wheel from the old one.

Brilliant, but slightly limited in the great plan of things.

Getting a betoniere (concrete mixer) is a rite of passage for anyone moving to France (unless you live in a flat in the city centre when you may be excused). Everyone can get a reasonably priced mixer at Brico Depot, it used to be “any colour as long as it’s orange” but now they have added yellow (not shown) and dark grey…

Most major retailers in France assume their customers are low life thieving scum. I was in a supermarket the other day and a very nice middle aged Hyacinth Bouquet lookalike, shuffled through the checkout in front of me. Having unloaded her cart she made a point of holding up her shopping bag to show the cashier that she was not stealing a pack of dusters or a piece of haddock. On the rare occasion that I remember to take a bag into a supermarket I make a point of looking as shady as possible and not showing that it is empty.

Brico Depot is no exception. The exit is like crossing a Warsaw pact border during the cold war.

There are barriers, little huts and guards. I suspect they have rifles hidden somewhere. They are friendly enough, but cannot resist the temptation to inspect the darkest crevasses of your car, sometimes with a torch bright enough to fry a frog at a thousand paces, looking for contraband.
My trailer load of blocks confused the cashier who was having a problem counting the blocks on the bottom layer. I did tell her how many I had but my language skills did not extend to explaining that it was impossible to get any more bricks on the bottom than on the top layer so all she had to do was double the number on the top… but she was having none of it and had to consult the guard for a second opinion.

The Bad News and the Good News

Have you heard the bad news?

We're out of Champagne.

I found this from the Dubai trip in November 2012 which I had written but not published - seems a pity to waste it...

When I go to the Gulf it rains (see Just Like Home 2). It did it in Qatar, Oman and now in Dubai. My visit coincided with the day we got access to what would be the production office in the Burj Khalifa complex in Downtown Dubai for the next couple of months. The complex is a mass of electronic security and you cannot move without swiping cards and a being beeped at by gates, doors and barriers. This is state of the art security - no doubt about it.

It rained on the way to Downtown Dubai but thankfully, it stopped just as we got out of the car.

It continued raining and the lake became as one with the sky... 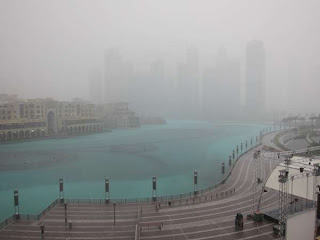 .. while the tallest man made structure in the world disappeared into the clouds. 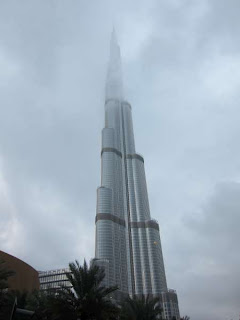 We finally found the outside of the office and were then passed from pillar to post trying to get in...
Armed with fresh instructions we headed off again, and heavens opened and we got really wet. Not just rained on wet, but sodden, soaked through. I have been less wet in a power shower. 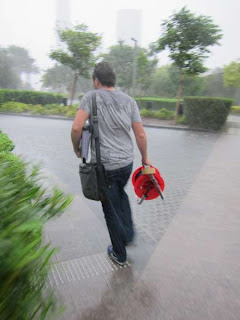 Soaked to the skin, literally, we met a man who said he could let us in (if he can find the door). 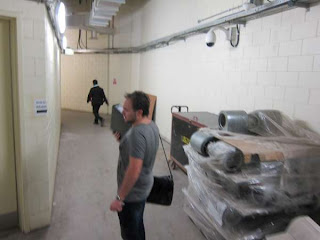 
We waited here for the best part of an hour, while someone authorised our passes found the right key by which time it had stopped raining and we had dried out and we were able to get on with some real work.

For the next eight weeks we used another door hidden in the corner of the office. It was never locked, had no security guard or electronic access system and was right next to the parking area. Tra-la-la...

* for the uninitiated;
Spinal Tap is a movie where the eponymous band get lost in the bowels of a venue looking for the stage. In the TV show, Blackadder, Rowan Atkinson (as Edmund Blackadder), describes a soppy and childish character as being 'wetter than a haddock's bathing costume'.

Odd One Out - Classics

Fabulous Prizes to be Won 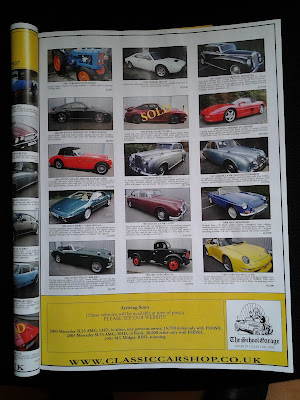