The sparky boys go to great lengths to protect people on site. The electrical installation is managed by Pearce Hire. As well as their bizarre habit of using cable ties to tie cables, they dig most cables which cross a public area. This is not unusual but these chaps do it with some panache. Rather than plough a furrow with a blade attached to a forklift which rips the grass, the turf is lifted and folded back, cables are buried and the grass is replaced - very neat, like everything on this site.

But it does not stop there. They then go on to spray zig-zag lines along the replaced turf to mark the location of the buried cable. Where the cable trench passes trader pitches they add a little narrative detail, such as DANGER ELECTRIC CABLE with little lightning flashes between each word. Adding a belt to the braces, they will then visit any trader with a pitch in the vicinity of a buried cable and point out the location and nature of the hazard. What could go wrong? 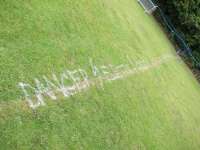 This is a potentially slanderous generalisation:  Traders are a particular breed and have their own rules. They are usually charming and helpful on the way in to ensure they get the best pitch, good vehicle access, passes that make life as easy as possible, parking and camping space as lose to their pitches as possible any other facilities that may be available.

At this point tunnel-vision sets in. They become fully focussed on getting set up to trade and they turn into an altogether different animal tending not to take much notice of anyone else. In their single minded determination to start taking cash they can instantly forget anything they have been told and ignore their own carefully documented procedures. 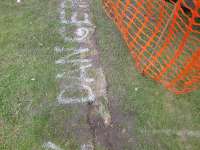 The observant reader will notice a small hole next to the letter ‘D’ on the picture above. The cynical reader will probably deduce that some spiked object made that hole and a reader possessing a  combination of these two characteristics may suspect that the sharp object is the steel pig-tail holding up the orange netting. They would be right.
The pin went through the cable, and between the inner cores without touching the copper wire. A millimetre to right or left wouldhave delivered a lethal number of volts and amps and other elelctical technicalities into anyone in contact with the pig-tail.

Seldom has the phrase ‘more luck than judgement’ been so appropriate. See also The Darwin Awards.
Posted by RPJ at 8:41 AM No comments:

The Cambridge Folk Festival has been around since 1965. That’s forty something years for proto-pedants. I first came here sometime in the mid-1970s. It was a bit of a jaunt from London with a few friends although I remember very little about it I am pretty sure we did not pay to get in and it is highly likely that we did not get more sensible and sober as the day went on. Forty something years later and I am back. This time being sensible and sobrer is kind of essential. But as it happens I still do not pay to get in.
This is my third year at Cambridge. It is the neatest, cleanest and tidiest festival site I have worked on,  and possibly in the history of festivals. If Her Maj had a festy  on the lawns of Buck House it would look like this.

Before the PA, lights and video  equipment arrives the sparky boys install the power supplies and working lights. I suspect they are instrumental in keeping their local cable tie supplier in business. They are also one of the few crews on site who actually use most of their cable ties to tie cables.  Every cable is restrained with the enthusiasm of Ms Whiplash at an Old Etonian party.

The site is planned and laid out to the with millimetre accuracy with all tents and traders allocated a space which is then marked out on the grass. Unlike other events where this is done, when the tents and traders arrive they actually fit into the space allocated – bloody marvellous. 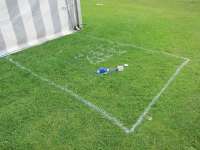 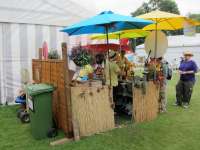 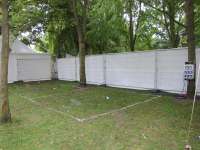 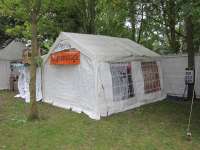 The stages are equally well ordered:


This finesse is also apparent in the campsite:

This spanner goes to a fancy dress party... 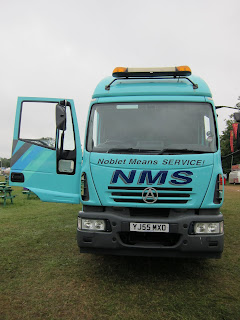 It’s all been said before so I will just make one observation of this vision of hell. To get to the station from Bletchley “Home of the Code Breakers” you are directed to go along H8 and take the V6, which comes directly after V4. They could have just used the simple formula x=2y/(func dx/dy)2 x √-1
Posted by RPJ at 12:23 PM No comments: