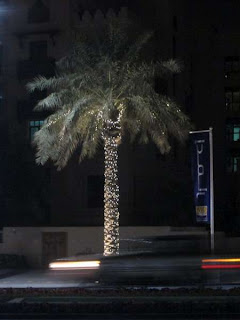 It seems there is a seasonal variation where stringers shoot up from around the base of the tree. 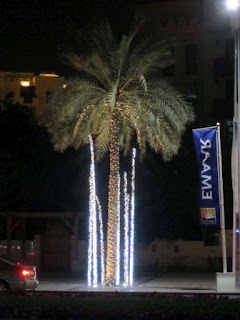 Presumably these will be pruned back in due course, but meanwhile they threaten to overwhelm the area. 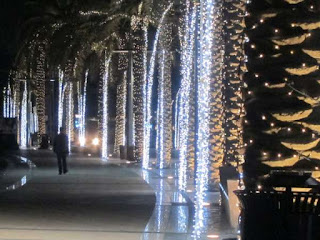 In a clearing I spot a snack bar. 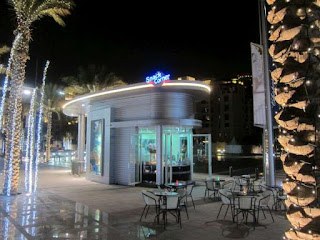 Ironically, despite having curved walls, a curved door and an oval roof it is called Snack Corner. Not a corner in sight.

A strange and contradictory place.
Posted by RPJ at 8:06 AM No comments:

December 25th is a strange day here. Our hosts know it’s Christmas, and they know it’s about shopping and Father Christmas / Santa Claus and that it is followed by Boxing Day

But being muslim they tend not to take the day off, which is fair enough, and they do not expect us to, which we can't do anyway due to the schedule. So we try to mark the day with those little things you see in most offices in the west.

We have a Christmas tree.

And I got a card

And there were some presents from the sort of thoughtful person who thinks about these things (i.e. not me)

The management gave us all a watch

And Nadia from the projector crew had a Santa hat.

Our caterers  know that Dec 25th has something to do with turkey, though I am sure they think it is Turkey.

On Christmas Eve we received an email saying that we would be served a ‘traditional Christmas dinner’ at 2pm. I am not a great fan of turkey, or traditional 'Christmas dinner' for that matter. So I was mildly relieved when our caterers turned up at about 12.30 with the regular sort of food that we have been served every day so far – even if, very much later, it did turn out to be beef and mushroom stew with macaroni cheese.

But before I got around to eating or even opening it and discovering what it was, I was called over to the control centre on the other side of the site for a meeting with les grand fromages. Luckily it was a quick meeting and only lasted a couple of hours.


I returned to the office to discover that after I had left they had also delivered the ‘Christmas dinner’, and I was reminded of  my farther telling me a story about Queen Victoria.

She was known to be a lady of diminutive height and ample girth – taller lying down than standing up, as it were. Her doctor put her on some salady sort of diet, and having eaten the first meal of her new regime she asked where her real meal was. Being (basically) spineless they gave her the other meal as well. I wondered if our caterers thought that Christmas dinner was in addition to the our usual lunch... no wonder foreigners think we are a bit odd.

It was quite acceptable actually. OK, not for the foodies among you who would have thought it gross, what with being reheated, soggy and served on a plastic plate. 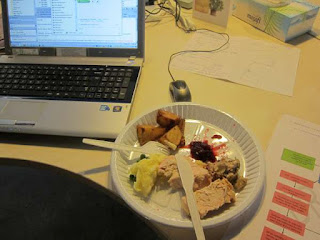 But on a job like this food is a rest, a change, a pause, a moment to think of something else - even if it is eaten at the desk as one tries to staunch the flow of emails that hemorrhage from the screen. However, I would not put any money on it being turkey on the grounds that it was all white meat, came in a roll and tasted indistinguishable from the chicken we get most days in one form or another.

Next time I'll go for a traditional meal in one of the many restaurants within a few minutes walk. 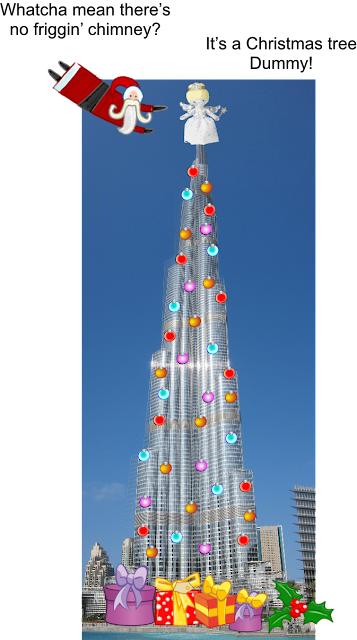 A
lot
more
stunning
pictures of
Dubai and the
tallest man-made
structure on the planet
can
be
had
on
Google.

I have not been into the medical facility in Churchill Square, Brighton or any other UK mall for that matter, but I doubt they provide the sort of service your Dubai shopper expects. 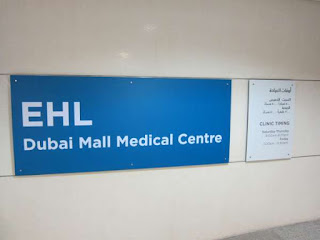 The waiting area is pleasant as aircraft hangars go 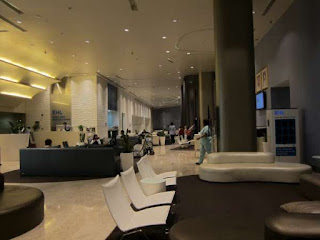 and comes complete with a Christmas tree. 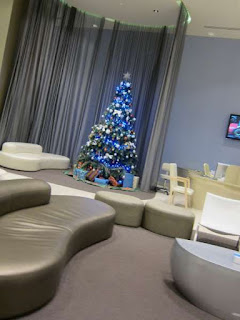 There is a café, 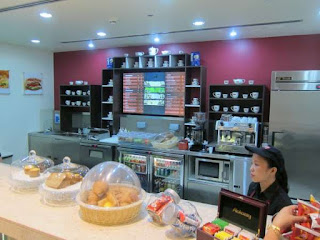 PS3 to sedate the kids, 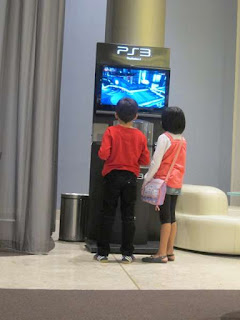 and a mobile phone charging point. 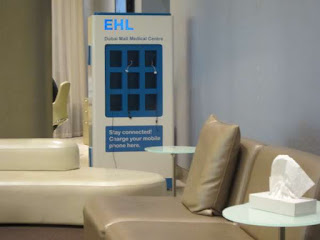 But the thing that got me was the menu. 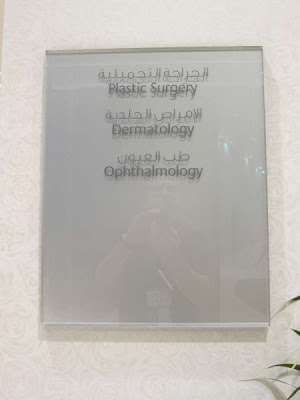 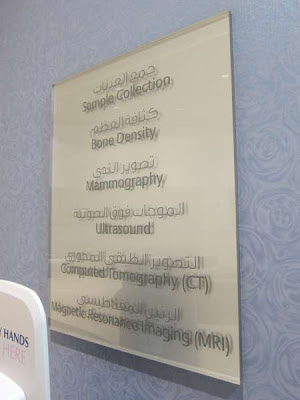 This is a full blown hospital. 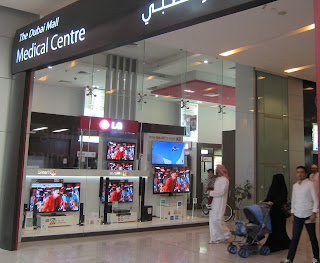 So why does it look like a TV shop?

Thought I’d better get this blog posted just in case those pesky Mayans were right and the world ends tomorrow (21 December 2012). And what better way to start the end of the world than with a nice cup of fresh coffee.

Unfortunately I am staying at a Holiday Inn, renowned for the producing the largest amount of the second worst coffee on the planet.

Fortunately, I took precautions and brought some of our regular of Brazilian coffee with me from France.

I know this sounds like taking Marmite and Baked Beans to India so you don’t have to eat the ‘funny foreign food’ but good coffee is good coffee so why compromise? When I get a moment I will find a nice jug to make it in, meanwhile I have a couple of oversize paper cups and a strainer …

It works for me.

To be fair to Holiday Inn, their coffee is marginally less-worse than the strange concoction served by Starbucks. I cannot understand how this chain of liars and cheats has become so popular. Among their many crimes against civilisation is the effect they have on independent coffee shops.

They seem to be everywhere, they just carry on as if they owned the place, they have enough money to get away with the sort of behaviour which would land most of us in jail and their principal product is a shallow representation of what it purports to be - in short the Jimmy Savile of coffee retailing.

I hope one day their share a similar fate and have their names expunged from history.

Here in Dubai, Tim Horton is doing his best. Not only is his coffee shop twice the size of the Starbucks next door...

But before we all slap young Tim on the back and carry him aloft in a victory parade around the town, Tim Hortons is not a plucky little local independent, it is another massive franchising operation and are probably as bad as their neighbour – or would like to be.

There is a fabulous prize to be won. To enter, use your skill and judgement to find a disgraced celebrity to represent Tim Horton’s (or write a sterling defence in no more than 10,000 well chosen words).

I have spent too long peering into dark corners and dingy recesses, behind vending machines and under benches furtively searching out power sockets at airports. 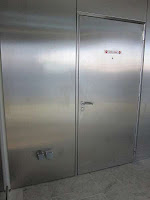 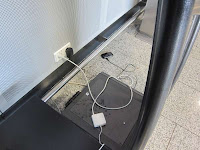 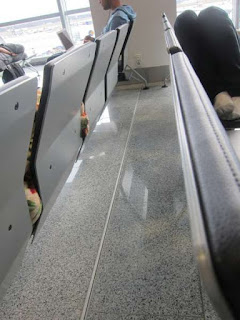 And when I find one I get twitchy waiting for the sudden blank screen as the cleaner decides that their vacuum cleaner is more important than whatever I happen to be doing.

I have been through Toulouse International Airport (Blagnac) a many times and they were particularly bad in this respect. But recently there has been a revolution. Apart from building a new terminal and revamping the shops they have recognised that people travel with electrical things they want to use and that their batteries are not really up to the job.

The new shiny Blagnac is now pretty well equipped for the iFlyer. There is a nice little office space with desk spaces tucked away on a mezzanine and this little run of usefulness tucked into the corner of a cafe. 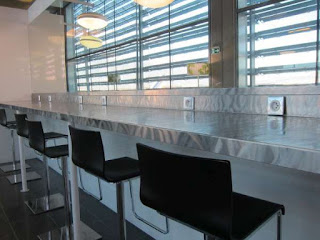 Nothing subtle about this provision at the gates. Anyone would think they actually wanted you to use them. 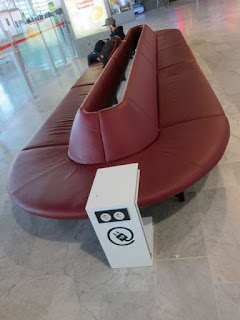 And for the traditionalist who like to sit on the floor there are still the old vacuum cleaner points in otherwise featureless walkways. 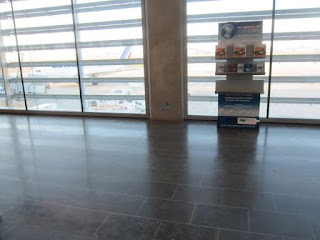 Blagnac also has 30 minutes of free  Wifi, when it runs out, you just start again… not sure if it is meant to do this, but who’s complaining?

Frankfurt is not quite so well equipped, but does have these work stations and 30 minutes of free Wifi. 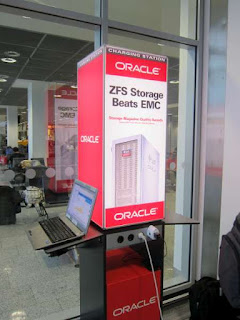 I am writing this blog on it. The Wifi password is texted to a mobile and only one password sent to a single mobile number can be used within 24 hours. With Teutonic adherence to the rules access it runs out after 30 minutes and gurzernenschplatz nicht habstel dorner volk geschaftzzzzzzzzzzzzzzzzzzzzzzzzzzzzzzz
Posted by RPJ at 3:30 PM No comments:

Don't do it here.

Signs are always an easy way of poking fun at foreigners. By way of apology I have to admit that, were I to try writing a sign in Arabic, I would probably be arrested for blasphemy, treason, libel or numerous offences against calligraphy. So it is with some humility that I have to ask what this sign might mean?

This sign might be appropriate placed next to a sluice or some designer toilet bowl, but it was attached to a wall in an otherwise empty subterranean corridor. 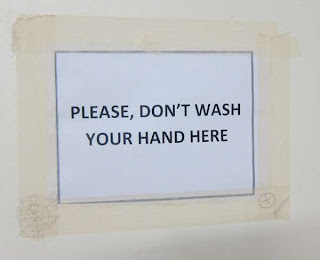 Sounds fairly reasonable (subject to not washing the other hand as well), but why would anyone want to...

I suspect this is a euphemism similar to an American's request to 'use the bathroom' - that is to say that our US cousins do not actually want a room which contains a bath. Similarly, this sign has little to do with hand washing (other than it is recommended afterwards).

This pair of signs on the security man's desk are a little less obscure, and even provide a mobile phone number for continuity of service. Some people never go off duty. 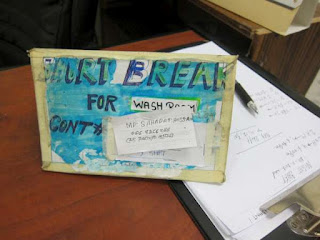 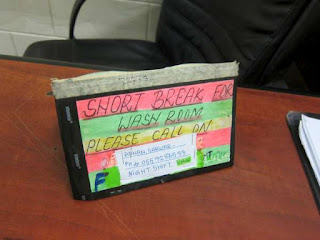 The answer to the question above:

Just as well, really, it would be a full time job.

Tomorrow or whenever: Something else...
Posted by RPJ at 7:38 AM No comments:

There are some stunning and original buildings in Dubai - and many more are planned. Unlike the concept cars we see in the press and at motor shows that never make it into production, these buildings actually stand a good chance of being built. 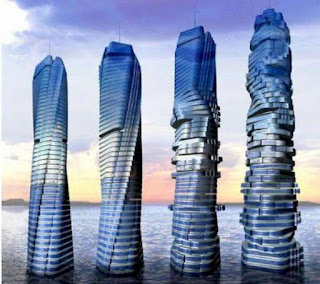 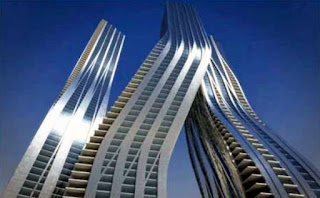 But one of the side effects of building a city the size of Dubai in a couple of decades (see It'll be nice when the finish it... 1) is that most of the buildings come from the same architectural era. This is very apparent in Dubai.

It is  true to say that there is considerable variety, but what is more noticeable is what the buildings have in common. The majority  look as thought the 'designers' (one hesitates to call them architects) were given a Lego catalogue with a limited colour palette, a tour of Docklands circa 1996 and just allowed to get on with it.

Most of these are buildings surrounding my hotel.

The exception actually is my hotel, a modest prize is offered for using your skill and judgement to guess which one.

The Bling Trees of Burj

This is the tallest building in the world.

It is over ten miles high, is made of recycled drink cans and should not be looked at without dark glasses.


It's design is rumoured to be inspired by a local variety of tree, Palmus Blingii


Tomorrow: It'll be nice when they finish it 2