The misery continued. For a start there were other people on the plane, which is always a nuisance. Some of them were not taking this snow business seriously.
I had a window seat but as I suspected it was over the wing (they do that just to wind you up, I mean why would you want a window seat? So you could admire the flowers in the window box? NO! it's so you can see the ground - you yuk numpty!) And the view was, indeed, second rate, but I did get this shot of the full moon. Little did I realise that we would be meeting again just a few hours later... 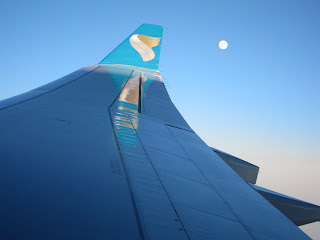 The bloke next to me fainted and had to be given oxygen which meant that I had to wait a full ten minutes until he was stabilised before I could go to the toilet.
I didn’t want to go to the toilet, but if I had it would have been most annoying.
A few minutes later they asked if there was a doctor on board… three bloody times! The announcement kept interrupting the movie I was watching and a I very nearly said I was a doctor just to shut them up.
Anyway, we finally got to Charles De Gaulle, arriving ten minutes late. What is it with these people? The airlines publish perfectly good timetables. If the pilots read them they would know what time to arrive. Just plain sloppy if you ask me.
After the chore of collecting luggage I found the bus stop. It had stopped snowing and started drizzling. The bus stop is just out there on the pavement with no cover. I had to wait for nearly four minutes until a bus arrived so I got a bit damp.
And then, can you believe it, they went to Gare de Lyon and Gare du Nord first. They finally dropped me off at Montparnasse around 10.15. Just because the bus passed these other two stations on the way and there were a few dozen passengers wanting to get off, does not mean that passengers for Montparnasse should suffer such inconvenience. Have they no sense of priorities?
Anyway, I found a cab for the last kilometre to the hotel. As we approached it I saw a row of tented stalls on the pavement. 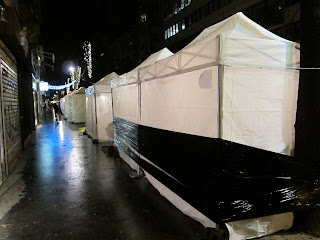 In an attempt to promote a little entente cordiale I asked the driver if this was a marche de noel, to which he replied that the marche de noel was on the Champs Elysées. Au contraire, I thought, but bit my tongue and suggested instead that maybe it was an encampment for people delayed by the snow. He had the decency to snort at this and said “peut-être”.
He dropped me at the hotel... 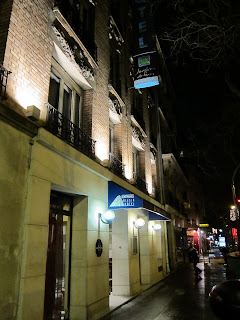 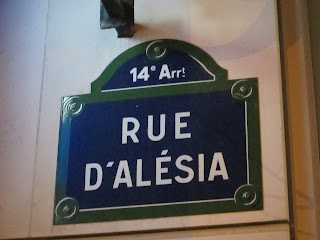 Although there were no bars or restaurants open there was a late store nearby where I bought a few cans of Heineken.
Stretched out in my small, but adequate room, sipping a beer, I was forced to watch my fellow humans suffering at airports from Heathrow to Frankfurt on CNN. 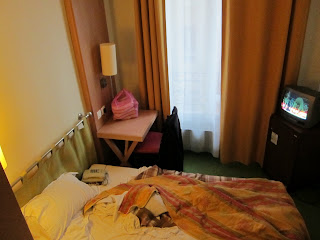 The feeling of compassion that swept over me was almost tangible. As I slowly slumped into slumber I sent them a telepathic message of support: ‘I too have suffered the misery of travel chaos, I share your pain.’ and had another beer. 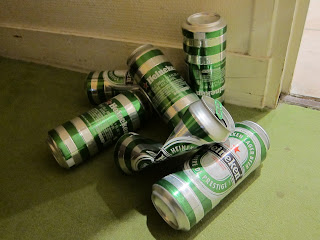 Two hours later I was woken up by some people talking very loudly in English about some very personal stuff. It took a while to realise what was going on, but I finally turned off the Jeremy Kyle show, got undressed, and slept very soundly for the rest of the night.
Posted by RPJ at 6:58 PM