Addendum - Wot I Got Rong

This post is written in reverse order so the fresh stuff appears at the top.
Consequently, the introduction is at the end - good eh?
2. This is getting silly. I now have to correct the correction below. I was going to say that the hotel had no National Day decorations so that I could use this photo of some previous lighting left lying around on the roof. 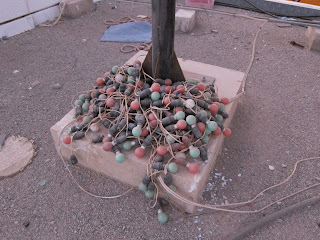 But then the photo would not load so I didn't say anything about them not having decorations - and then I forgot I hadn't said it, hence the correction below. The picture has now loaded, so normal confusion is restored. I hope that cleas it up.

I will include it in a future 'National Day' blog - don't miss it.


1. I said that I thought The Hotel Al Falaj did not have National Day decoration. The WFC blog has this photo: 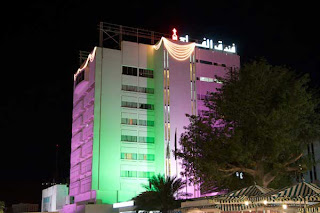 The white rope lights are still there but without the red and green they just look like rope lights. I have never seen the hotel with these flood light turned on. I am sure you can understand my confusion.

INTRODUCTION
Hi
I know it will come as something of a surprise that there may be mistakes in this blog, but it is just possible... OK it's a dead cert.

One of the nice things about blogging (as opposed to sending postcards) is the opportunity it affords to correct mistakes.

I could re-edit the original posting, but that is not really ethical. So in best Guardian style here are some corrections which will be added to in the unlikely event of further inaccuracies.
Posted by RPJ at 6:15 AM