Snippets of Wisdom - The Right Type of Snow?

Heathrow is snowed in and our flight has been cancelled - we think. It is slightly frustrating not knowing if the cancellation means we fly tomorrow or if it is a re-scheduling. If the latter then they may just fly us as far as they can, as soon as they can. Yesterday's flight got as far as Frankfurt and, as far as we know, it is still there.
Some years ago, after a weekend trip to a German festival near Stuttgart with Fischer-Z, we were waiting in the lobby of a hotel for our ride to the airport with Hogan's Heroes who had played the same gig. Not wanting to pass up the opportunity to say hello to a hero, I asked Albert Lee where they were off to next. He said they had they were playing the Paradiso in Amsterdam that night. I said something about it being a hell of drive to which he replied "That's what they pay us for, we play for free and get paid to travel."
This is a very sensible view and one which has helped me through countless waits, delays, cancellations and cock-ups ever since. So next time you are delayed and want to scream, shout, stomp your feet, and rip out the eyeballs of the airline official who will not tell you anything, remember there is nothing you can do, that you will only get stressed. And think of the money.
There are a couple of faults with this: 1) if you are not being paid it does not work and 2) money is not the be-all and end-all, but it is a good panacea at times of hair-tearing frustration.

We have to be prepared for Oman Air to call and say 'You have an hour to get to the airport'. So we can't do anything useful (eg go and improve our minds at a museum), retail-related (eg visit the souk to get rid of our excess Rials on niff, naff and trivia) or partcularly entertaining (eg go dune-bashing or camel racing).
But it is much better to kill time in the hotel than at the airport. It's 28 degrees in the shade, sunny and a very pleasant coolness seems to eminate from the ripply blue water. 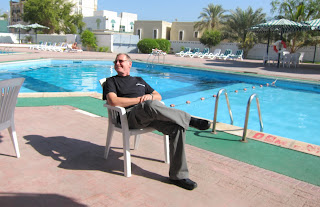 Sitting by the pool, I was trying to remember what Albert Lee's earlier band was called. He has been with Hogan's Heros for many years but I am sure he had another band before that...
[Later]
I just looked him up on the Interweb. Albert Lee was with Chris Farlowe and the Thunderbirds, Heads Hands and Feet and has played with just about every class act you ever heard of. (Younger readers are excused and can go and pimp their playstations - or whatever it is young people get up to when not improving their minds with ancient, musical trivialities).
While browsing the HH site I noticed that Gavin Povey has joined the band. Can anyone confirm a very shaky recollection that Gavin was (keyboard player?) in The Edge with Jon Moss (founder of Culture Club with Boy George), and if my memory is not completely shot, Lu Edmonds of The Clash?
http://www.ps3pub.com/2007/02/20/pimp-my-playstation/
Posted by RPJ at 9:36 AM