I had been shopping in the delightful suburb of Ruwi (see forthcoming blog Shopping - After a Fashion, watch this space) and went into a department store which I thought was called 'tempt' but obviously isn't... But see what I mean? 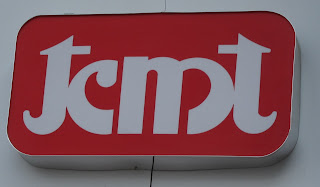 It resembled three supermarkets, complete with baskets trolleys and checkouts, stacked on top of each other.
In the clothing department (3rd Floor) I noticed an item called Panty Sport (well, you would, wouldn’t you) but discovered it to be a cultural linguistic mish-mash involving the notion of panty hose (it’s US speak for tights, m’lud) which do not ladder easily and thus would be good for active pastimes (eg sport). And only half a rial, quite a bargain. Incidentaly if you look sort of closely, but not too closely,she seems to be both rollerskating and skateboarding at the same time... clever! 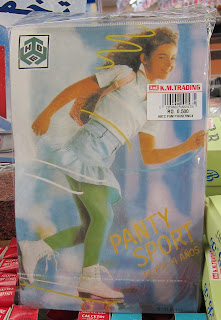 Not far away was the dish dasha department (even better value than Carrefour) and with part of my mind on Panty Sport and the another part on dish dashas I passed the men’s underwear section, but this was only logged by my subconscious, which failed to alert me until some time later when I was strolling back to the hotel.
I saw a young man walking down the road with the sun behind him… 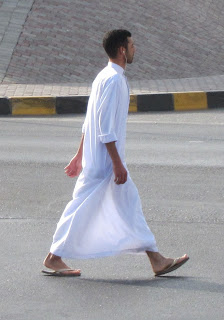 …and in the same way that, sooner or later, everyone in the western world who comes across the kilt is likely to confront the question of what a Scotsman wears under it, I found myself musing the same question about the dish dasha wearer.
So having taken the photo above and discovered that there was not really enough detail, I quickened my pace to catch up with the poor man. Fortunately he was going the same way as I wanted to go so I felt I was limiting my exposure to cries of "Bloody hell, PJ get a life!", "Perv!" and similar sentiments which tend to be expressed by people who have their own relationship with Panty Sport and the like, but probably keep it to themselves. He was also wearing headphones and was oblivious to all but some inner reverie - or maybe Phil Collins.
Anyway, each time he took a step his dish dasha flapped back and forth revealing a line of black type on some nether garment. Although the words POLICE DEPT were quite clear it was not easy to photograph.

I am not overly familiar with brands and even less so with the ways of the Omani police other than that they are a force to be reckoned with. I calculated that on the balance of probabilities, photographing them in their underwear is best avoided. So I backed off and returned to the hotel.
Posted by RPJ at 4:25 PM