Snippets of Wisdom - A night on the Tiles

Last night Kris and I went looking for supper and found a roadside kebab shack which served chicken and beef wraps. They cost 300 small things each which is about bugger all. They also tasted very good and were devoid of the congealed grease that the Brits use to cement them to the pavements of our cities on Saturday nights. Kris was so impressed he had another one. 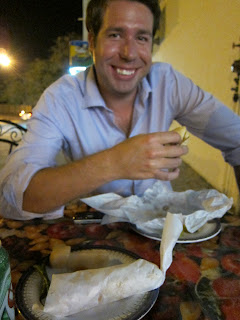 So was I and so did I.
When we got back to the hotel Kris went to bed as he had an airport run at 3am.

I fancied a moment of quiet contemplation so went to the bar for a beer and a crossword. 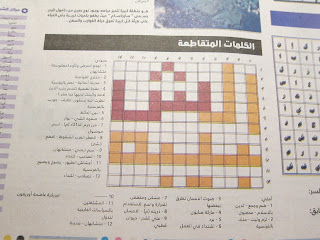 Defeated by the crossword, I thought Soduku might be easier, even in Arabic. 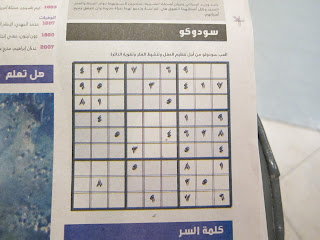 But due to a printing registration error all the 2s and 3s looked the same. They are pretty similar at the best of times. 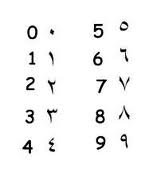 So I gave up and asked for a can of beer to take up onto the roof. This involves carrying it through public parts of the hotel which is mostly forbidden There is an exception on the ground floor if you are going from the bar to the pool area or restaurant. We were unable to establish if the same exception applied to the short distance between the top bar and the roof where you are required to go to smoke. The bar tender said "OK, but keep it under your hat". 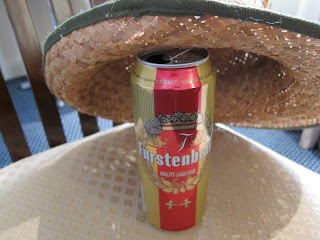 So off I went to the roof with my well hatted beer. The views of Muscat are pretty good from the 9th floor (click on it to get a bigger version).

You can also see the hotel's two swimming pools. 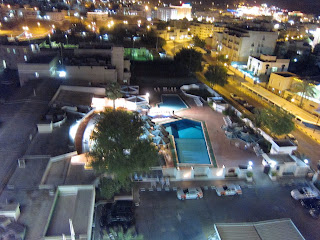 There were some people larking around and throwing each other in the pool.


The Indian man on the roof asked why they did this when they were fully clothed. I said swimming was a very effective release for the stresses of the day and that by remaining clothed they did not have to go all the way to their rooms and change into the modest swimwear that is required here.

He said that yoga was also good for unwinding, and added that they have a saying where he comes from: "wet chuddies are a warning, you'll feel shite in the morning".

At least I think that's what he said, but I may have been mistaken.
Posted by RPJ at 4:02 AM