I was working from an office in Bristol on the day the Olympic Torch Relay was due to arrive at the harbour. Being only a hunderd yards or so from the venue (as well as having a ticket on account of working in the same office as the event organiser) I thought I'd take a look. Due to the one-way system the hunderd yards turned into a mile of battling through the crowds. After this strenuous  exertion I decided to stop for a restorative pint and discovered I had a halfway decent view of the floating harbour. 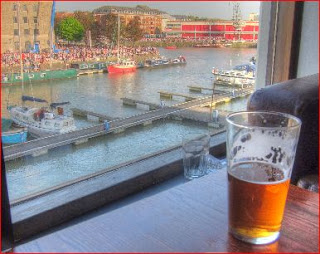 The torch was due to arrive in about half an hour by boat and I thought I could either join the throng  by the stage or see it pass, however briefly, on its way to the landing stage, or stop for another pint. As ever the pub option came out on top.

While I waited I watched the police introduce an element of menace by doing the dark-police-thing in their dark boat with their dark glasses and dark machine guns .

and thought we should have pink police for this sort of thing.


I watched Avon Fire and Rescue struggle into their waterproofs.

And I watched the assemble multitude wait, climb over railings and not quite fall in the water 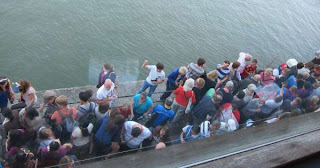 On the whole, I thought, I would rather get a passing glimpse of the cause of all this activity from this vantage point than be down there.

So imagine my surprise when the damn thing arrived and parked right outside the window. 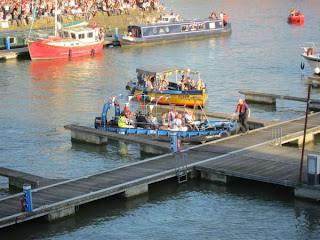 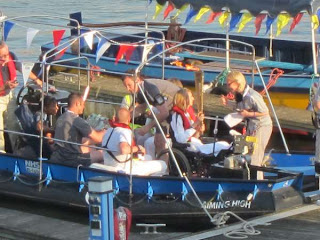 After twenty minutes of complex flame-juggling which seemed to involve passing the flickering thing between the torch and a couple of Davey lamps and back again, our torch bearer, complete with wheelchair and Olympian guard, went off to pass the flame to the next member of the relay team.

I finally wandered to the stage area and bumped into a young man who I assume was the next torch bearer. Wheelchairs notwithstanding, all this athleticisism and rampant fitness is enough to make a chap take up smoking.